This filtration system can optimise your on-site waste streams and reduce external disposal costs, as it is capable of removing large amounts of fast and slow-separating pollutants from aqueous streams. The Tank itself is made from stainless steel for a high resistance to a wide range of chemicals.

A power plant has a high polluted cooling water basin. The pollution came from bacteria, pipeline-rust and environmental impact. The customer had to change the water more often, which was expensive. Baker engineered a full process to treat the water via a bypass, without any manual operation needed. The customer raised the efficiency of the cooling unit and decreased costs due to lower water usage.

The Lamella Filter Tank has a number of unique features

Treatment of waste streams with slow-settling and slow-floating pollution using conventional settling tanks or clarifiers isn’t very efficient and requires a large footprint. BakerCorp offers an effective solution, the Lamella Filter Tank, which reduces treatment time thanks to its ability to remove large amounts of fast and slow-separating pollutants from aqueous streams. 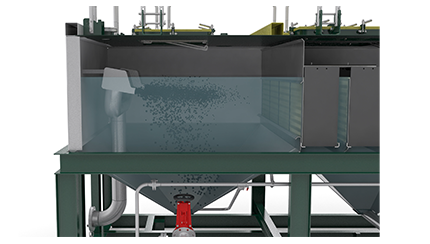 The core of the Lamella Filter Tank consists of a number of Lamella packages with vertical plates, positioned in the centre of the unit. As the waste stream enters the tank through a flow breaker, its speed is slowed and turbulence reduced, creating circumstances for fast-settling solids to accumulate in the lower cone of the first compartment. 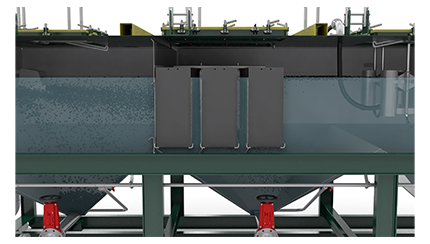 The stream then flows into the second compartment. Here the vertical Lamella packages enable the slow-separating pollution to settle or float more quickly and efficiently. As the flow passes between the plates of each Lamella pack, turbulence is further minimised.

Due to the shorter settling distance of the particles, interruptions in the flow are created allowing time for physical effects such as Van der Waals and electrostatic forces to bind small pollutants into larger, faster-separating ones. Because this increases the separation speed, the majority of the remaining settling pollutants fall into the bottom of the second cone, while the floating pollutants rise to the top. 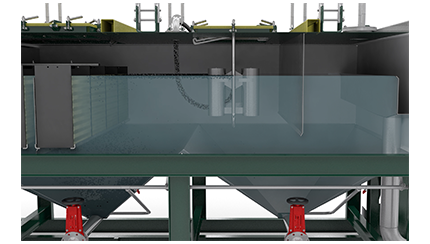 In the third compartment, an underrun blocks the layer of floating pollution which is easily removed with a skimmer. A final overrun controls the water level, as fluctuations have a negative impact on the system’s efficiency. 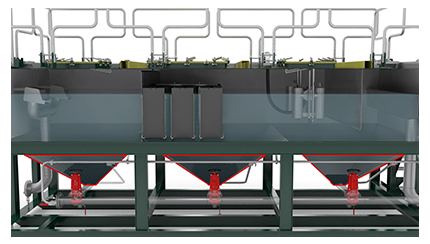 The pollution in the cones can be removed simply via the drain valves. To eliminate any downtime often associated with traditional auger systems, the Lamella Filter Tank is equipped with a flushing system to avoid the cones becoming clogged.

Want to learn more about the Lamella Filter Tank and how it can optimise your waste stream? Call for an appointment with one of our experts +44 (0)330 333 2611

Temporary containment for a broad range of liquids.