Brian Heastan, Kissick’s jobsite superintendent, frequently turns to United Rentals’ slide rail shoring system when faced with the daunting task of digging next to functioning roadways and utilities. “That’s what we use whenever we absolutely don’t want anything to move outside of our dig,” Heastan says.

In part to comply with environmental regulations, Kansas City Water initiated the Overflow Control Program (OCP) in 2010 to separate its combined storm water and sewerage lines. The largest infrastructure investment in the city’s history, the 25-year, nearly $5 billion OCP will ultimately reduce overflows from combined sewer systems and prevent overflows from separate sewer systems. In the process, nearly 58 square miles of combined sewer system – located in the oldest parts of Kansas City – will be separated.

Kissick has utilized the UR slide rail system in numerous locations under its current contract, which is expected to finish in February. “Recently, we were working literally on the edge of Gregory Boulevard (a busy Kansas City thoroughfare) and absolutely did not want Gregory to move or the dirt under it to move,” Heastan says. “We knew that could only be achieved with the slide rail system.”

In fact, the road remained operational throughout the process, even while Kissick dug partway into the road shoulder to place new pipe. While the 12-by-12-by-20-foot-deep hole literally abutted the road, traffic had to be shifted only slightly to avoid the work. Kissick used the slide rail system again along nearby Cleveland Avenue to secure existing gas and water lines around the dig. “They were on all sides, right next to the hole,” Heastan adds.

Brett Weipert, outside sales representative and trench safety manager at UR’s Kansas City office, says the system is growing in popularity as projects, such as those in Kansas City, become more complex. Sliding into tracked rails as the earth is excavated, the system eliminates the kind of soil movement seen in typical open-cut excavations, improving safety and reducing delays associated with reconstruction after a collapse. “The system is crucial when you’re trying to prevent any kind of ground loss,” Weipert says. “It allows you to insert the panels as you excavate.”

The modular nature of the system eliminates many of the safety and productivity issues associated with trench shields, tight sheeting, beam and plate systems, wood shoring and other trench solutions. Comprised of steel panels and vertical steel posts, slide rail shoring systems can be used for anything from basic four-sided pit excavations to complex, large-diameter pipeline installations.

There’s virtually no limit to the supply of slide rail system components at UR’s Kansas City facility – Weipert estimates more than 100 of the panels are sitting in inventory, ranging from 12 to 30 feet in length. As a hub location, the facility services a broad 11-state area across the Midwest, from Oklahoma City to Chicago. 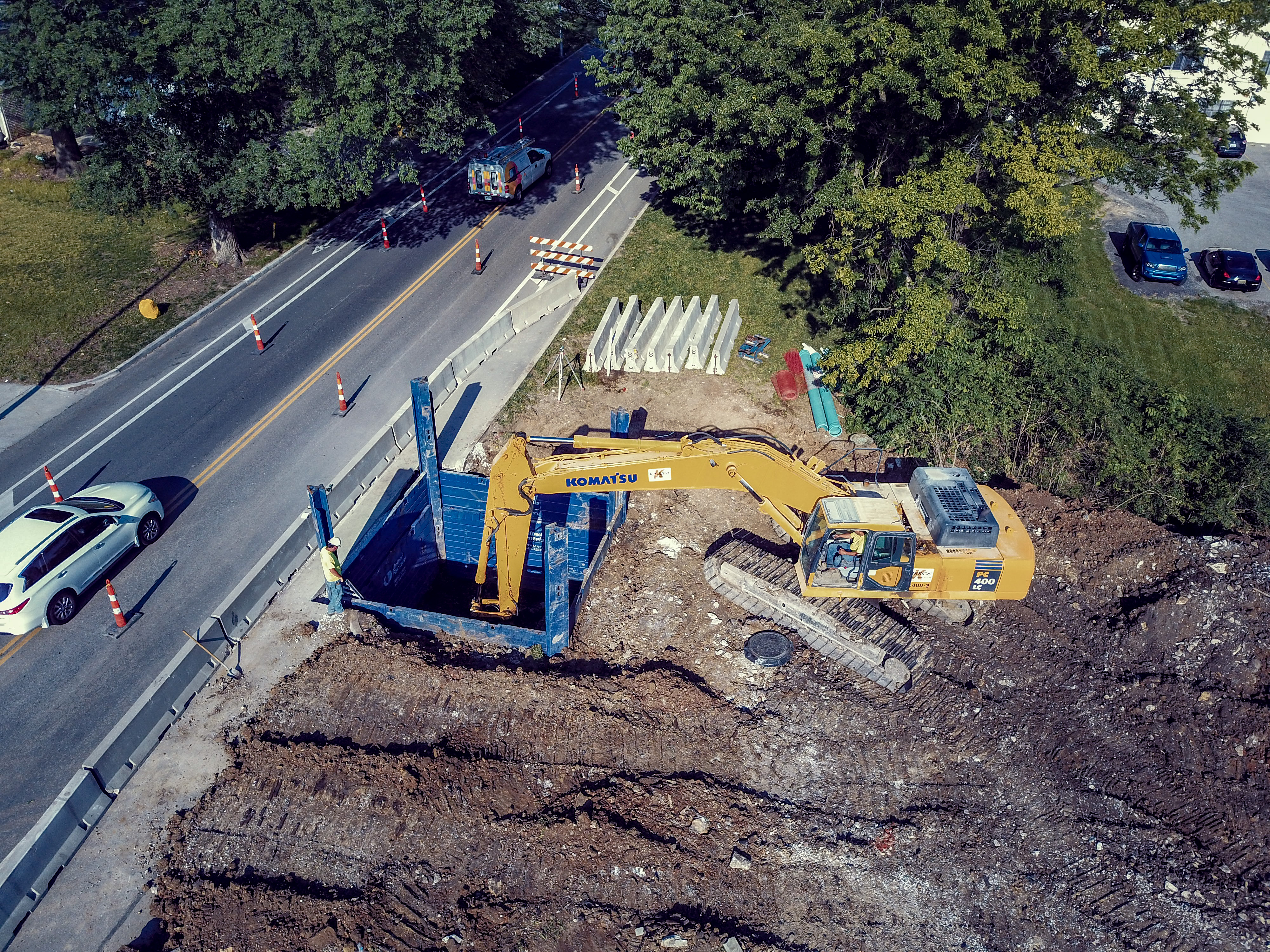 As an added bonus, staff members such as Weipert provide guidance to contractors throughout the installation process, assisting with the design and placement of system components. “It’s not something our customers use every day, so we guide them on which panel goes where,” he adds. “Often, the operator will want to dig, dig, dig, but this is more of a finesse type process.”

At the Kansas City site, Weipert met with Kissick personnel early and often to offer customized solutions based upon the obstacles they would encounter. “We looked at the plans, the size of the structure, potential obstacles etc.,” he says. In the process, the UR staff helped the contractor avoid potential pitfalls, such as digging too deep prior to panel installation.

Another big selling point – Kissick could use its existing equipment to install the slide rail system. With only the bucket of an excavator, the operator installed the entirety of the system – beams, rails and panels – without the need of a crane or vibratory hammer. “Everything goes down together,” Weipert says. “They were able to dig a couple feet and then use the excavator to insert the panels and posts, dig another couple feet and push down the posts and panels in tandem.”

Sliding into tracked rails as the earth is excavated, the system eliminates the kind of soil movement seen in typical open-cut excavations, improving safety and reducing delays associated with reconstruction after a collapse.