As PV panel prices drop, businesses of all kinds, from tech companies to big box retailers, are adding solar to their energy strategy.

Many large corporations, from big box retailers to mall owners, have at least one thing in common: huge buildings with large, flat roofs. It’s little wonder so many are going solar.

Better technology and more interest in clean energy are driving the adoption of photovoltaic arrays. But the biggest factor is the bottom line: Prices for installed PV panels have dropped over the last seven years from more than $5 per watt to around $2.

Later this year, when fully operational, the 17 MW rooftop at Apple Park may become the world’s largest rooftop solar array. The computer company’s massive new donut-shaped headquarters will operate at net zero energy. Despite the array’s impressive size, the energy it will supply will be overshadowed by a nearby 130 MW ground-based solar system.

Enormous banks of computer servers require a tremendous amount of power. Ground-based solar farms are now a big part of solving that problem for tech companies. Apple, which has committed to running on 100 percent renewable energy by 2020, is among the trendsetters. Early this year, the computer giant announced plans for the largest power purchase agreement ever for a data center: NV Energy will build 200 MW worth of panels to power Apple’s Reno data center. The project is slated for completion in 2019.

Only 10 states have more installed solar capacity than Target’s 147.5 megawatts. That makes the Minnesota-based retail chain the largest solar operator of any U.S. company (that is not a utility or a solar provider). More than 350 of the company’s 1,800 stores already have rooftop arrays. But Target’s latest and largest solar array, at nearly 3 MW, sits atop a distribution center in sun-drenched Arizona. The installation, in the shape of Target's iconic bullseye logo, opened earlier this year and stares up at passengers who are taking off or landing at nearby Phoenix Sky Harbor International Airport. 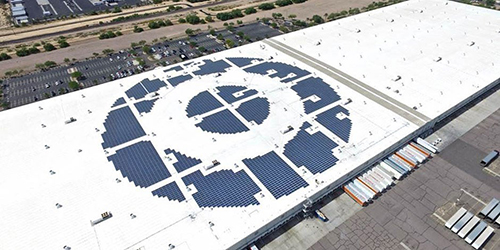 You’ve probably never heard of Prologis, but the San Francisco-based company owns, maintains and operates more warehouses than anyone else in the United States. Prologis also happens to be a giant when it comes to solar. In 2016, arrays on its properties generated more than108 megawatts. That’s more than any U.S. company except Target and Walmart. Its biggest solar commitment involves three warehouses in Southern California’s Inland Empire. An investment company leases the rooftops and owns the PV installations, which produce 6.2 MW among them.

Eco-friendly General Growth sees rooftop solar as a competitive advantage over other shopping mall owners. Solar arrays generate more than 30 kilowatt hours at nearly 30 of its properties. General Growth’s largest array, at Altamonte Mall outside Orlando, Florida, opened in a 2015, with a generating capacity of nearly 2 MW.

Leave it to Tesla founder Elon Musk to win the game of superlatives. At 5.5 million square feet, the company’s Gigafactory in Sparks, Nevada, will have the largest footprint of any building in the world. No surprise, then, that the battery plant will also have the world’s largest solar array. With 70 MW of generating capacity, it will be four times the size of Apple Park’s array. The rooftop panels will be supplemented by nearby ground-based panels. Some production already has begun at the Gigafactory, which the company says will be fully operational in 2020