When it comes to safely and efficiently evacuating a jobsite, two factors rule the day: having a detailed site-specific evacuation plan in place, and having a way to ensure that every worker gets the message that it’s time to hightail it to the muster point.

For large jobsites, companies may resort to air horns or expensive alarm systems. Other options include sending alarms by radio or cellphone — but many jobsite restrict the use of cellphones.

One solution some United Rentals customers have adopted is the Spot-r EvacTag from Triax Technologies. The tags, which can be easily attached to objects using a cable tie or drilled onto surfaces, emit a 100-decibel acoustic alarm and a highly visible LED light.

They can be used in conjunction with the wearable Spot-r Clip, which tracks worker location via the Spot-r mesh network. In the event of a jobsite emergency, managers can trigger an 80-decibel alarm that sounds on each worker’s clip.

“The tag is the smoke alarm within the network. It’s a secondary means of safety,” said Kevin Noonan in United Rentals’ Advanced Solutions Group.

The tags are easy to set up. “They self-configure. They’re battery powered, so it’s relatively simple,” says Noonan. “They go in strategic locations, such as near stairwells. On a jobsite in Florida, we positioned the EvacTags near the headquarters area because those individuals did not wear the clips.”

When companies use the EvacTags together with the Spot-r wearable devices, they can track worker headcounts and locations by zone and floor to make sure everyone is making their way out during an evacuation.

According to Triax, one New York City contractor cut evacuation times by 72 percent using the EvacTags in evacuation drills.

On construction sites, time is money. But during evacuations, time can also mean lives. Every second counts when getting workers to safety. 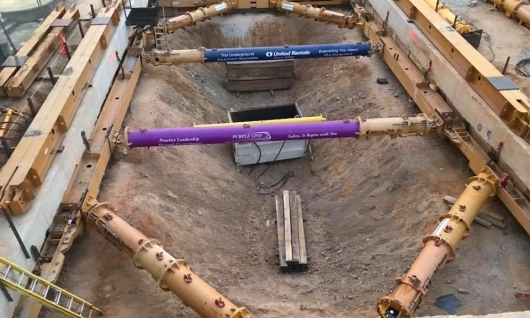