The $5.6 billion, 16-mile Purple Line light rail will aid Maryland commuters by connecting various suburbs to each other and to Washington D.C. Although the line will run primarily above ground, it will include two underground stations and a tunnel — and it’s on those underground portions of the project where United Rentals’ trench and excavation expertise is making a difference.

Speeding excavation by thinking outside the box

At the site of the Bethesda station, contractors are digging and blasting a 160-foot shaft that will connect the station to the DC Metro Red Line underneath it. Several miles away, crews are digging the entrances and exits for the 1,100- foot underground Plymouth Street tunnel and a pit for the underground Manchester Place station that will connect with one end of the tunnel.

Traditionally, contractors have shored up such large-scale excavations with steel walers and steel pipe struts that must be welded in place. But that’s a time-consuming (not to mention potentially dangerous) process. Since construction activities for the Purple Line were already delayed by a year due to legal issues, PLTP was looking for ways to speed up the schedule.

United Rentals was able to design a better, faster solution: a hydraulic shoring system that cut shoring time at the Bethesda station alone by two-thirds and saved the contractor more than $800,000 in labor. 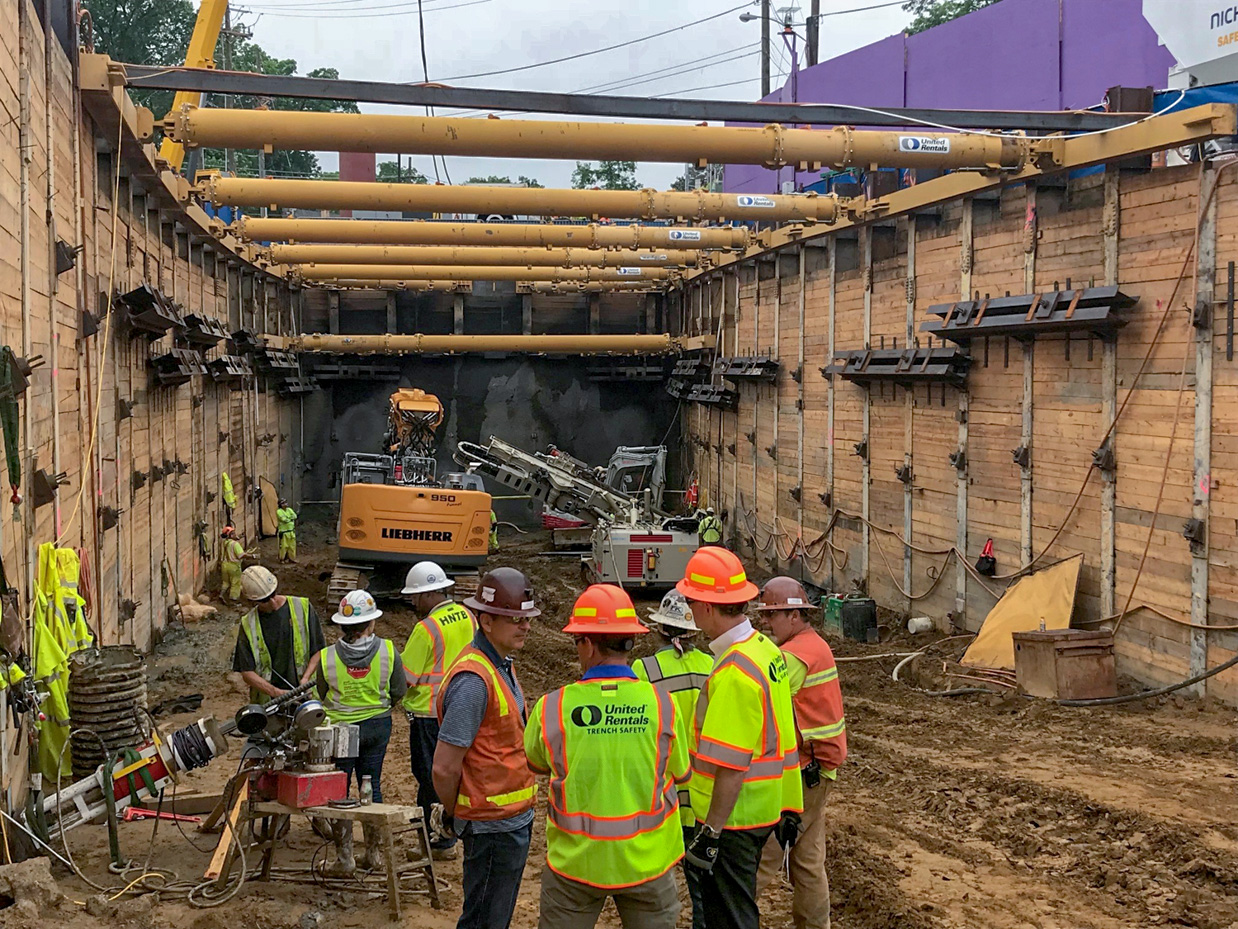 “United Rentals has really helped us with speed of excavation,” said Jeff Hammer, PLTC project engineer for the Bethesda Station south entrance. “A traditional system would have taken us a lot longer to weld, to fabricate, to stress and to do all the other things a traditional shoring system would require. The United Rentals system allowed us to excavate in a traditional method and to put the shoring, walers and struts in very quickly.”

United Rentals began working with PLTP a full year before the first purchase orders for the project went out. Once the United Rentals team understood the challenges the contractor would be facing, they realized the excavations would require some heavy-duty support. Thinking outside the box, the company placed an order for 150-tonne and 250-tonne hydraulic struts that could handle the very large loads at all three excavation sites.

“United Rentals is the only company on this side of the world that has this 250-tonne equipment,” said Michael Barr, a sales engineer for United Rentals’ trench safety region.

“We had to get the equipment here and then get our people trained on it to learn its ins and outs. It was a team effort, from our installation advisors to our engineers to the people in our hub in Greensboro, North Carolina, who actually received the equipment and built, tested and inspected it.”

For extra safety, United Rentals installed load pins on every strut in the Bethesda shaft so the load on each strut could be monitored in real time, especially when blasting was taking place.

United Rentals also provided the sealed and stamped engineered plans for the hydraulic shoring at all three excavation sites.

Adding to the myriad challenges was the fact that the construction sites are located in densely populated areas. At the Bethesda site, for example, the engineers had to account for surcharges generated by 15- to 20-story office buildings adjacent to the shaft and ensure that the blasting did not impact the operations of the Red Line below.

The hydraulic struts for the 160-foot shaft were placed every 16 to 18 feet down the shaft. After the hydraulic knee braces (corner braces) were installed and pressurized, crews excavated from within the hole down to the next level. A United Rentals installation adviser was on site to ensure that the shoring was installed according to the engineered plans.

Work on the Bethesda station shaft began in June 2018; a year later PLTC had excavated down to the 100-foot mark. At that point, construction crews temporarily stopped excavation and began installing, from the bottom up, the vertical concrete walls that will line the shaft permanently.

United Rentals will be removing its hydraulic struts at two of the five levels as the concrete lifts are poured. “Then we will take some of the struts that we removed and put them back in. Instead of bearing against a waler, they will bear against the finished concrete walls,” explained Barr. “That will help maintain the integrity of the excavation; the concrete itself isn’t enough to supply the same support that our struts were providing.”

To prevent the surface of the finished concrete from cracking, United Rentals has designed a special 3-foot-square steel end plate for the hydraulic struts to bear against.

The largest struts were used to shore the pit for the Manchester Place station. The pit is only 56 to 60 feet deep but nearly 100 feet wide and 200 feet long. That makes it the largest hydraulically supported excavation in North America.

“These 250-tonne struts will go out 146 feet without any type of internal support or kingpins,” he noted.

Placing the longest struts, which measure 4 feet in diameter, was a logistical challenge. United Rentals used tapered strut extenders to achieve the required width. “We had to fly in a portion of the strut, set it on one side, elevate the other side, and then fly in the hydraulic ram with a crane. Once we set it in place, we bolted the system together inside the excavation,” said Barr.

In about a year, when the project no longer requires the hydraulic shoring, removing the struts will be relatively easy. “We just go in and turn the ram-out valve until it releases the pressure. Contrast that to releasing the pressure on a welded beam, where a guy with a welding torch has to stand right beside the struts and the walers and cut them out. That can be very dangerous,” said Barr. 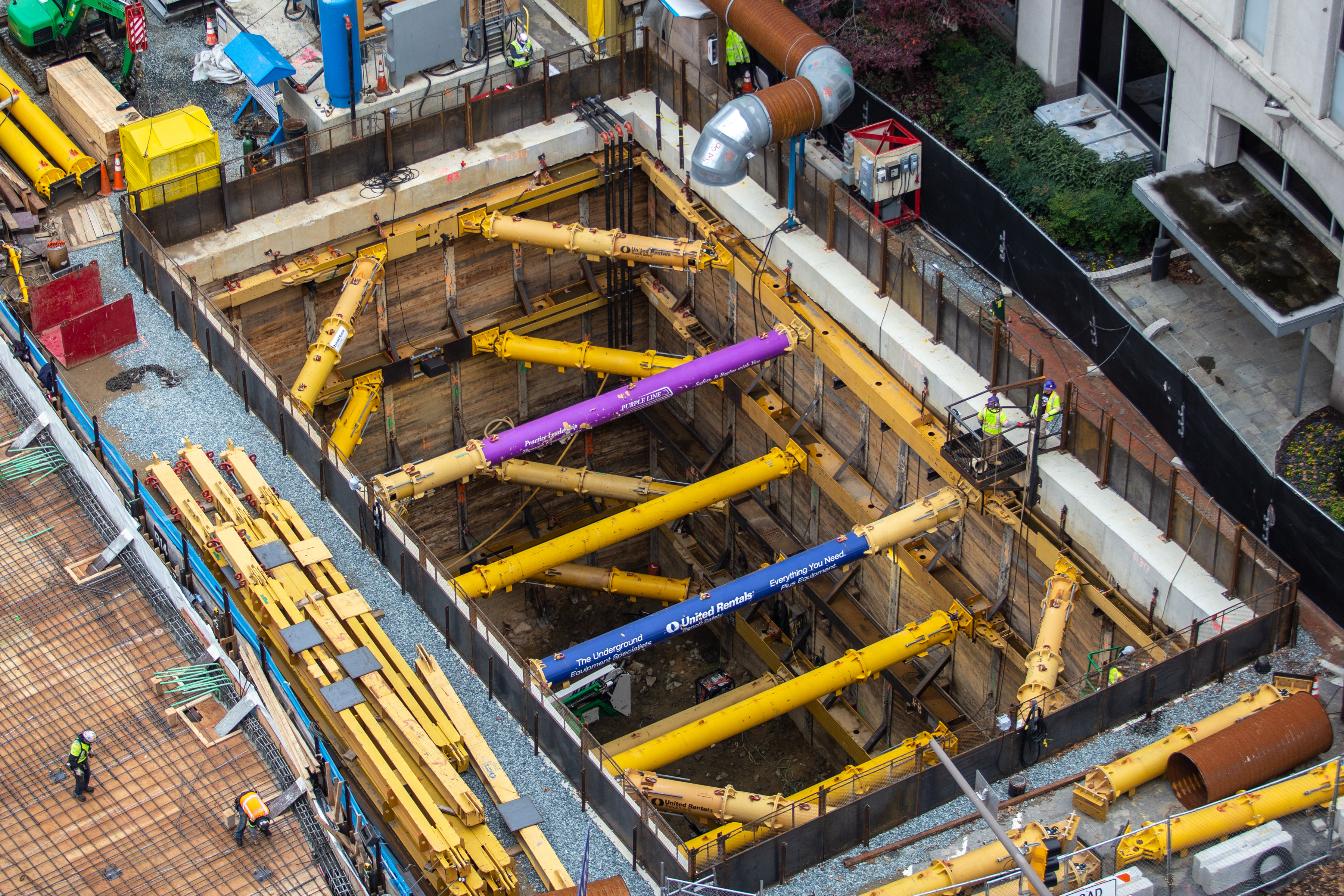 A commitment to solving problems and providing innovative solutions, along with decades of experience in excavation design and engineering, allowed United Rentals to help the customer stay on time and on budget.

For example, when the preloading requirement for the struts was greater than PLTC had expected, United Rentals used its engineering resources and its field team to ensure that the hydraulic shoring could still be used. The preloads were so high that United Rentals substituted hydraulic oil for the water and antifreeze it generally uses inside the struts to achieve adequate pressures.

When faced with challenges, said Hammer, “They got the right equipment and worked through to solve those problems quickly.”

“United Rentals has been a good partner on a very difficult excavation,” Hammer continued. “Their system is very flexible, so it allows us to do some things that you couldn’t do with traditional systems. Installation was a lot quicker, their technical support was great, and they’re easy to work with.”

United Rentals has been a good partner on a very difficult excavation. Their system is very flexible, so it allows us to do some things that you couldn’t do with traditional systems. Installation was a lot quicker, their technical support was great, and they’re easy to work with.

A commitment to solving problems and providing innovative solutions, along with decades of experience in excavation design and engineering, allowed United Rentals to help the customer stay on time and on budget.