Adjusted EPS2 for the quarter was $11.37 per diluted share, compared with $2.67 for the same period the prior year. Excluding the estimated $8.03 per share benefit associated with the enacted tax reform discussed above, adjusted EPS for the fourth quarter of 2017 would have been $3.34. Adjusted EBITDA2 was $947 million and adjusted EBITDA margin was 49.3% for the quarter, compared with $749 million and 49.2%, respectively, for the same period the prior year.

Michael Kneeland, chief executive officer of United Rentals, said, "We capped a year of record results with a strong fourth quarter finish on the back of broad-based demand. Pro forma volume increased nearly 9% year-over-year in the quarter, and rental rates were up 2%. For the full year, we exceeded the upper-band of guidance on total revenue, adjusted EBITDA and free cash flow, and increased our ROIC by 50 basis points year-over-year to its highest level since 2015."

Kneeland continued, "Our 2018 guidance reflects the confidence we feel in our operating environment based on what we hear from customers and see in key leading indicators. Our optimism is further supported by the tailwinds we expect from leveraging our 2017 acquisitions and our ongoing investments in people and technology, as well as the recent U.S. tax reform. Our strategy remains focused on balancing growth and returns to maximize our long-term value."

The company provided the following outlook for the full year 2018.

While we continue to assess the full impact of the Tax Cuts and Jobs Act of 2017 (the “Act”), our preliminary analysis suggests we will meaningfully benefit from the legislation. In particular, the combination of a lower U.S. federal tax rate at 21% and the full expensing of capital spending will materially exceed the impact of the repeal of Like-Kind Exchange provisions, which had allowed for the deferral of taxable gains on the sale of used equipment. On a net basis, and leaving all other factors unchanged, we estimate that the reforms will benefit our 2018 free cash flow by at least $250 million, which is incorporated into our 2018 outlook. On a blended basis, we expect an effective tax rate of approximately 25% in 2018.

The Act impacted our 2017 results primarily due to (i) a one-time non-cash tax benefit estimated at $746 million, reflecting the revaluation of our net deferred tax liability using a U.S. federal tax rate of 21% and (ii) a one-time transition tax estimated at $57 million on our unremitted foreign earnings and profits, which we will elect to pay over an eight-year period.

If the 21% federal statutory tax rate following the enacted tax reform discussed above was applied to ROIC for the year ended December 31, 2017, we estimate that ROIC would have been approximately 10.7%. Going forward, we expect ROIC to materially increase from the 8.8% achieved in 2017 due to the enacted tax reform.

The company previously announced that it would resume its pre-existing $1 billion program to repurchase shares of its common stock (the “Program”). The Program commenced in November 2015 and was paused in October 2016 (at which point, the company had completed $627 million of repurchases under the Program) as the company evaluated potential acquisition opportunities. The company completed $28 million of repurchases under the Program in 2017, and intends to complete the remaining $345 million in 2018.

Free cash flow, earnings before interest, taxes, depreciation and amortization (EBITDA), adjusted EBITDA, and adjusted earnings per share (adjusted EPS) are non-GAAP financial measures as defined under the rules of the SEC. Free cash flow represents net cash provided by operating activities, less purchases of rental and non-rental equipment plus proceeds from sales of rental and non-rental equipment and excess tax benefits from share-based payment arrangements. EBITDA represents the sum of net income, (benefit) provision for income taxes, interest expense, net, depreciation of rental equipment and non-rental depreciation and amortization. Adjusted EBITDA represents EBITDA plus the sum of the merger related costs, restructuring charge, stock compensation expense, net, and the impact of the fair value mark-up of acquired fleet. Adjusted EPS represents EPS plus the sum of the merger related costs, restructuring charge, the impact on interest expense related to the fair value adjustment of acquired RSC indebtedness, the impact on depreciation related to acquired fleet and property and equipment, the impact of the fair value mark-up of acquired fleet, merger related intangible asset amortization, asset impairment charge and the loss on repurchase/redemption of debt securities and amendment of ABL facility. The company believes that: (i) free cash flow provides useful additional information concerning cash flow available to meet future debt service obligations and working capital requirements; (ii) EBITDA and adjusted EBITDA provide useful information about operating performance and period-over-period growth, and help investors gain an understanding of the factors and trends affecting our ongoing cash earnings, from which capital investments are made and debt is serviced; and (iii) adjusted EPS provides useful information concerning future profitability. However, none of these measures should be considered as alternatives to net income, cash flows from operating activities or earnings per share under GAAP as indicators of operating performance or liquidity.

United Rentals, Inc. is the largest equipment rental company in the world. The company has an integrated network of 997 rental locations in 49 states and every Canadian province. The company’s approximately 14,800 employees serve construction and industrial customers, utilities, municipalities, homeowners and others. The company offers approximately 3,400 classes of equipment for rent with a total original cost of $11.51 billion. United Rentals is a member of the Standard & Poor’s 500 Index, the Barron’s 400 Index and the Russell 3000 Index® and is headquartered in Stamford, Conn. Additional information about United Rentals is available at unitedrentals.com.

This press release contains forward-looking statements within the meaning of Section21E of the Securities Exchange Act of 1934, as amended, and the Private Securities Litigation Reform Act of 1995, known as the PSLRA.These statements can generally be identified by the use of forward-looking terminology such as “believe,” “expect,” “may,” “will,” “should,” “seek,” “on-track,” “plan,” “project,” “forecast,” “intend” or “anticipate,” or the negative thereof or comparable terminology, or by discussions of vision, strategy or outlook. These statements are based on current plans, estimates and projections, and, therefore, you should not place undue reliance on them. No forward-looking statement can be guaranteed, and actual results may differ materially from those projected. Factors that could cause actual results to differ materially from those projected include, but are not limited to, the following: (1) the challenges associated with past or future acquisitions, including NES and Neff, such as undiscovered liabilities, costs, integration issues and/or the inability to achieve the cost and revenue synergies expected; (2) a slowdown in North American construction and industrial activities, which could reduce our revenues and profitability; (3) our significant indebtedness, which requires us to use a substantial portion of our cash flow for debt service and can constrain our flexibility in responding to unanticipated or adverse business conditions; (4) the inability to refinance our indebtedness at terms that are favorable to us, or at all; (5) the incurrence of additional debt, which could exacerbate the risks associated with our current level of indebtedness; (6) noncompliance with covenants in our debt agreements, which could result in termination of our credit facilities and acceleration of outstanding borrowings; (7) restrictive covenants and amount of borrowings permitted under our debt agreements, which could limit our financial and operational flexibility; (8) an overcapacity of fleet in the equipment rental industry; (9) a decrease in levels of infrastructure spending, including lower than expected government funding for construction projects; (10) fluctuations in the price of our common stock and inability to complete stock repurchases in the time frame and/or on the terms anticipated; (11) our rates and time utilization being less than anticipated; (12) our inability to manage credit risk adequately or to collect on contracts with customers; (13) our inability to access the capital that our business or growth plans may require; (14) the incurrence of impairment charges; (15) trends in oil and natural gas could adversely affect demand for our services and products; (16) our dependence on distributions from subsidiaries as a result of our holding company structure and the fact that such distributions could be limited by contractual or legal restrictions; (17) an increase in our loss reserves to address business operations or other claims and any claims that exceed our established levels of reserves; (18) the incurrence of additional costs and expenses (including indemnification obligations) in connection with litigation, regulatory or investigatory matters; (19) the outcome or other potential consequences of litigation and other claims and regulatory matters relating to our business, including certain claims that our insurance may not cover; (20) the effect that certain provisions in our charter and certain debt agreements and our significant indebtedness may have of making more difficult or otherwise discouraging, delaying or deterring a takeover or other change of control of us; (21) management turnover and inability to attract and retain key personnel; (22) our costs being more than anticipated and/or the inability to realize expected savings in the amounts or time frames planned; (23) our dependence on key suppliers to obtain equipment and other supplies for our business on acceptable terms; (24) our inability to sell our new or used fleet in the amounts, or at the prices, we expect; (25) competition from existing and new competitors; (26) security breaches, cybersecurity attacks and other significant disruptions in our information technology systems; (27) the costs of complying with environmental, safety and foreign laws and regulations, as well as other risks associated with non-U.S. operations, including currency exchange risk; (28) labor difficulties and labor-based legislation affecting our labor relations and operations generally; (29) increases in our maintenance and replacement costs and/or decreases in the residual value of our equipment; and (30) the effect of changes in tax law, such as the effect of the Tax Cuts and Jobs Act that was enacted on December 22, 2017. For a more complete description of these and other possible risks and uncertainties, please refer to our Annual Report on Form 10-K for the year ended December 31, 2017, as well as to our subsequent filings with the SEC. The forward-looking statements contained herein speak only as of the date hereof, and we make no commitment to update or publicly release any revisions to forward-looking statements in order to reflect new information or subsequent events, circumstances or changes in expectations. 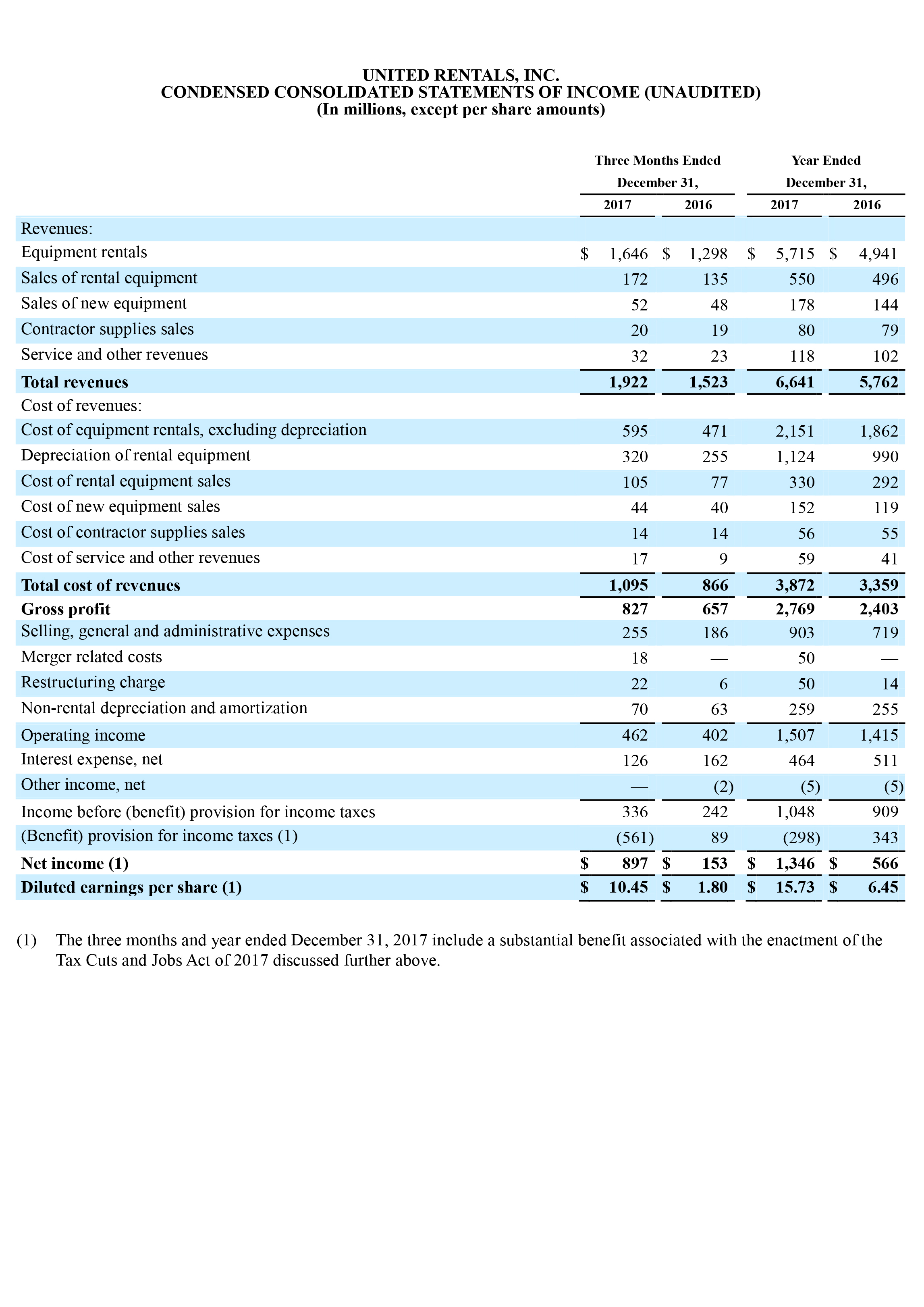 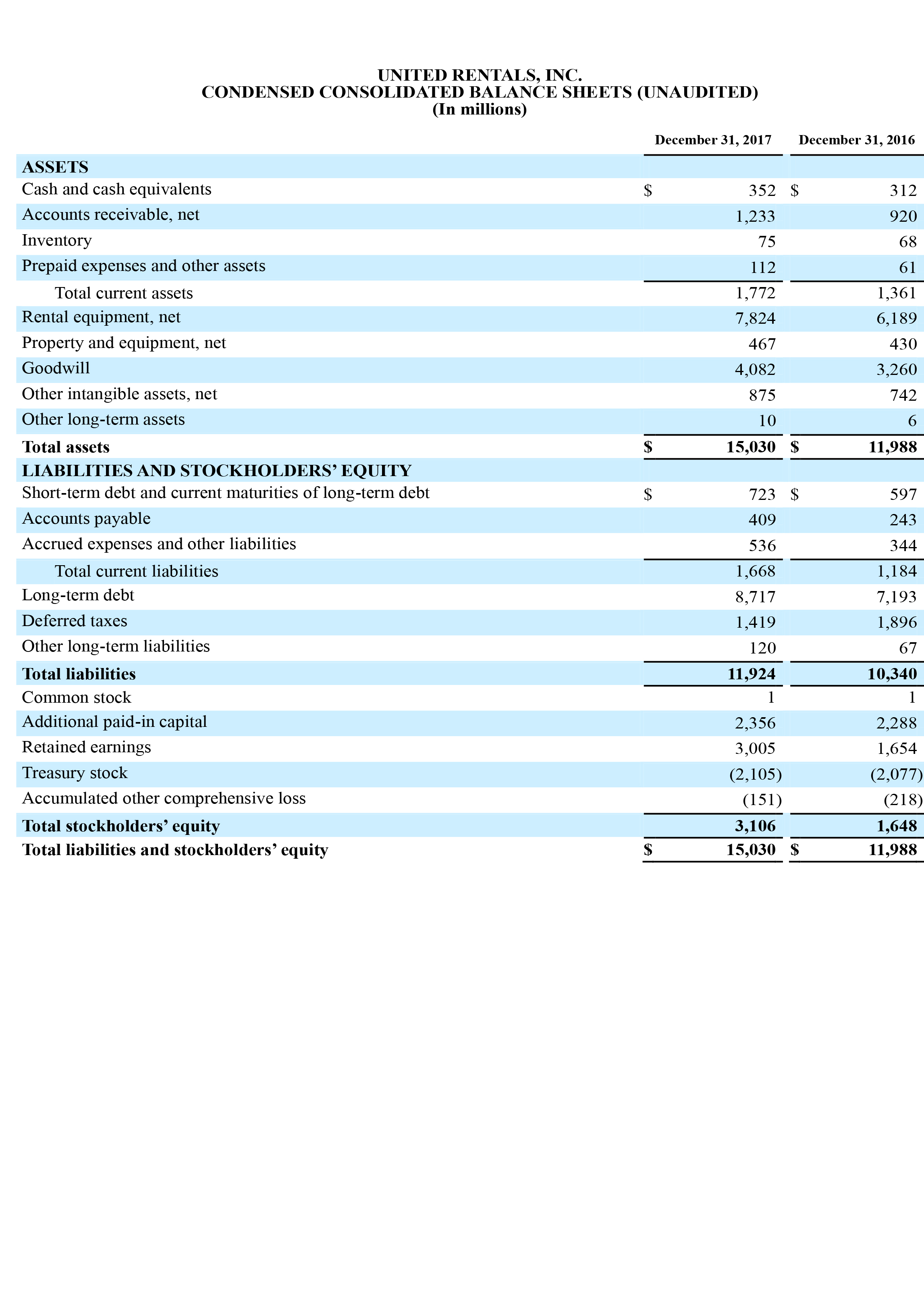 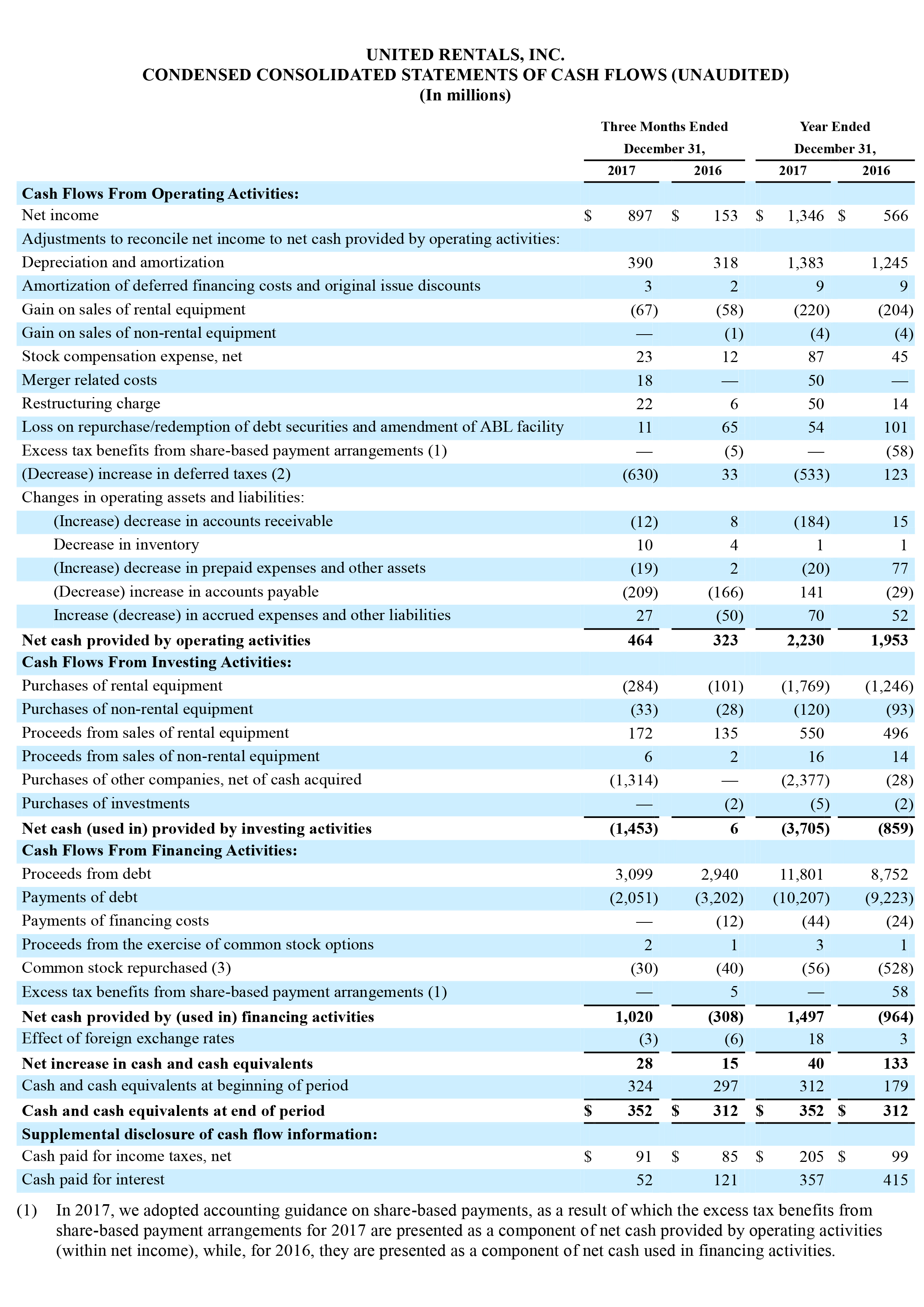 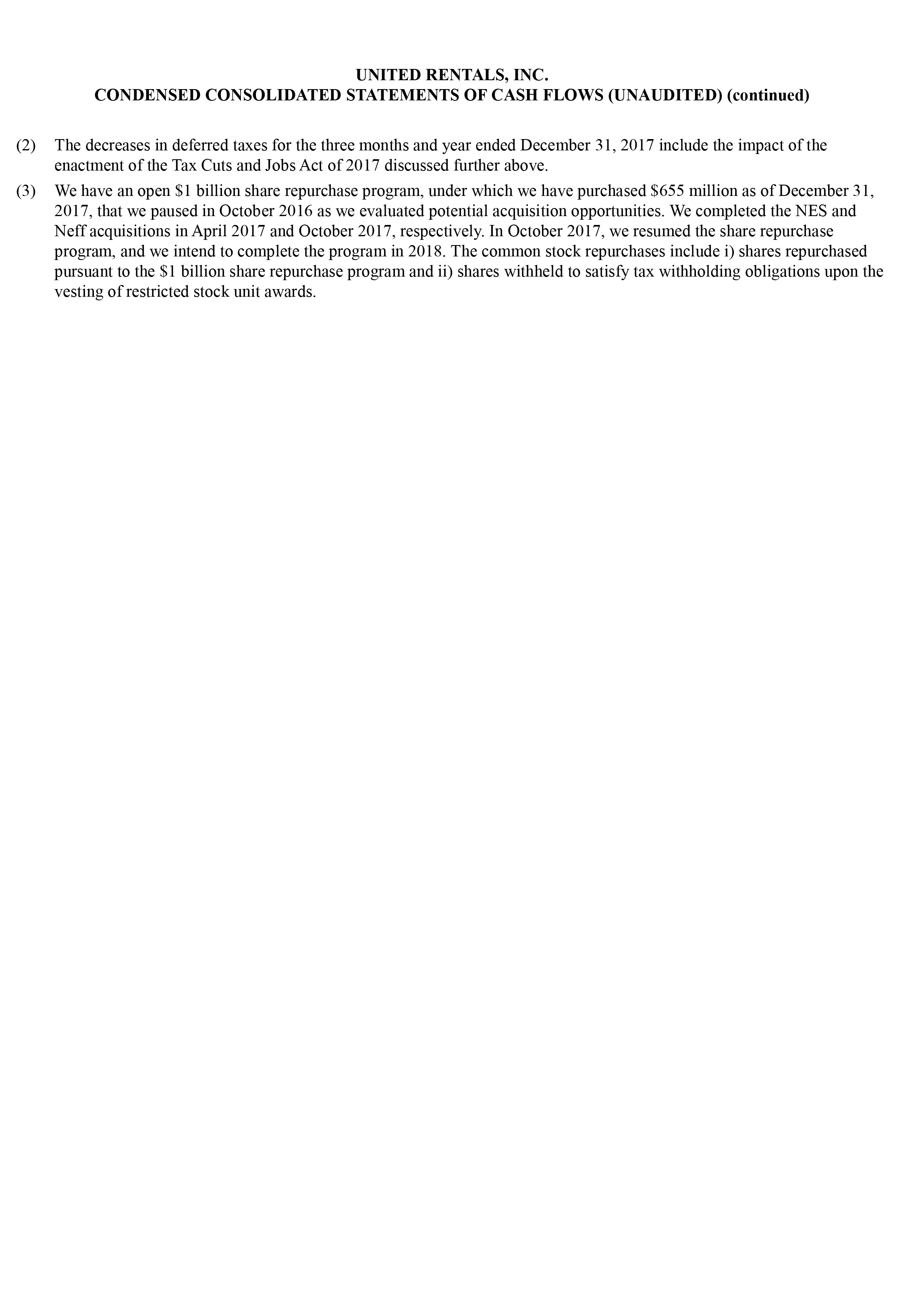 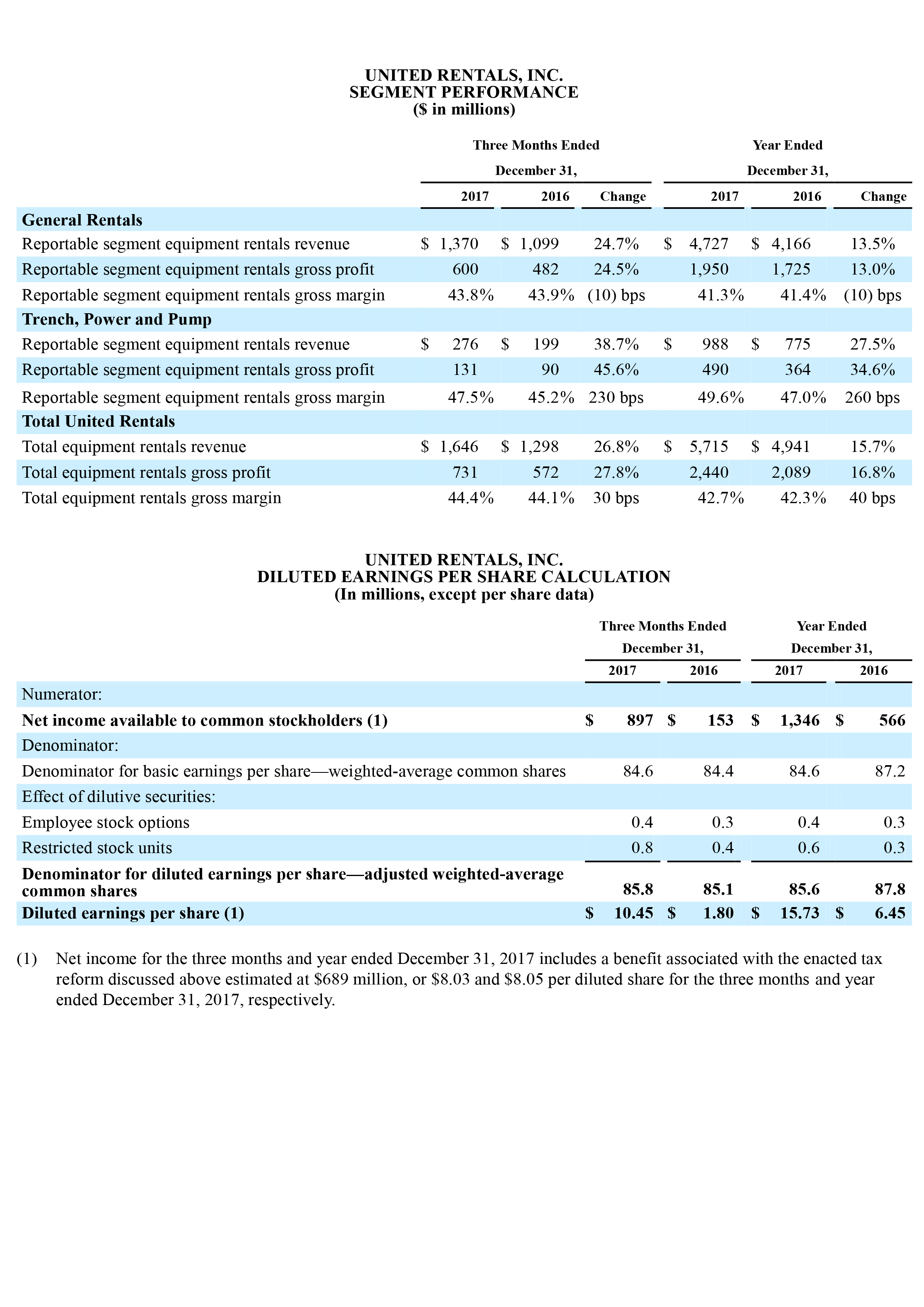 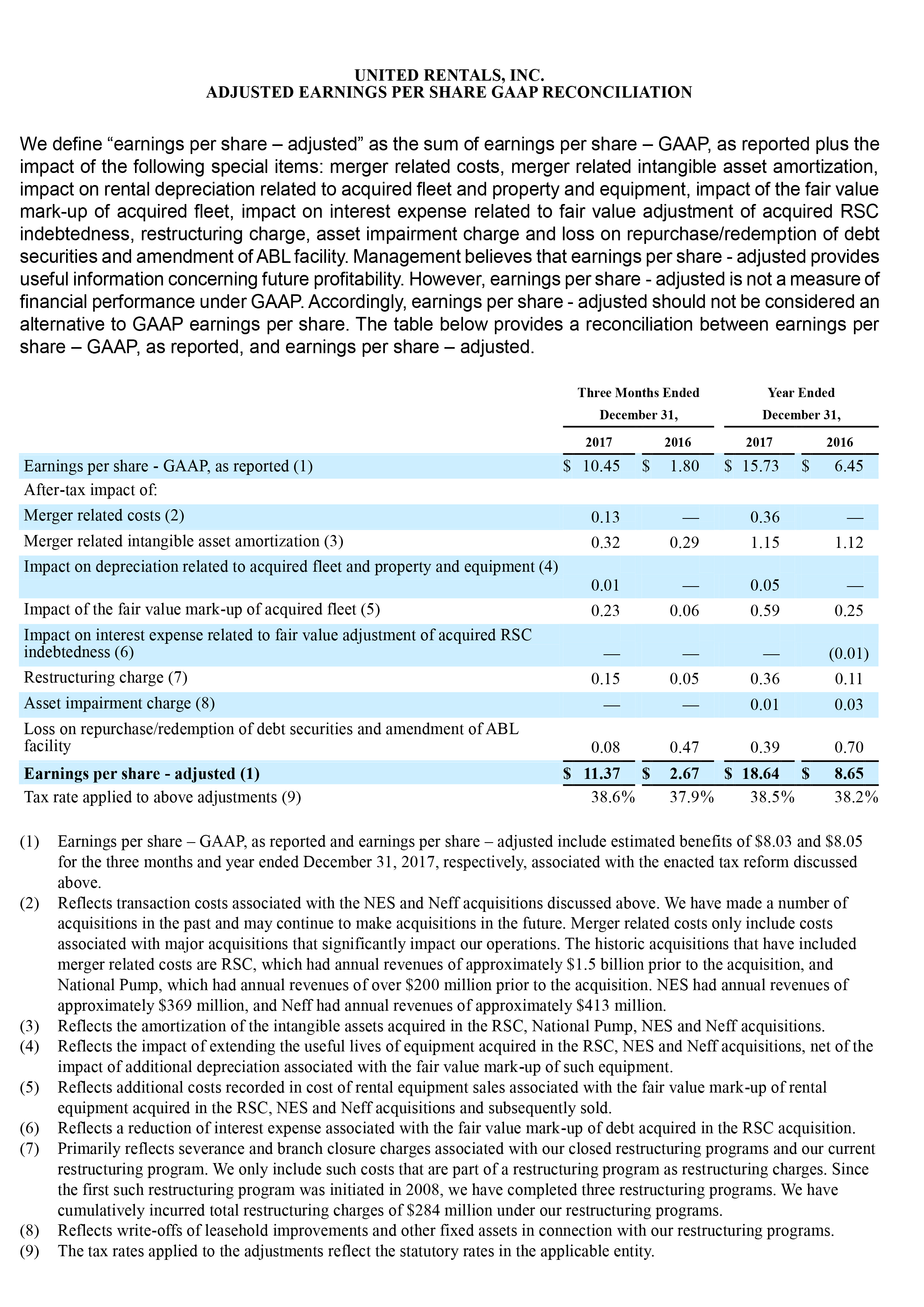 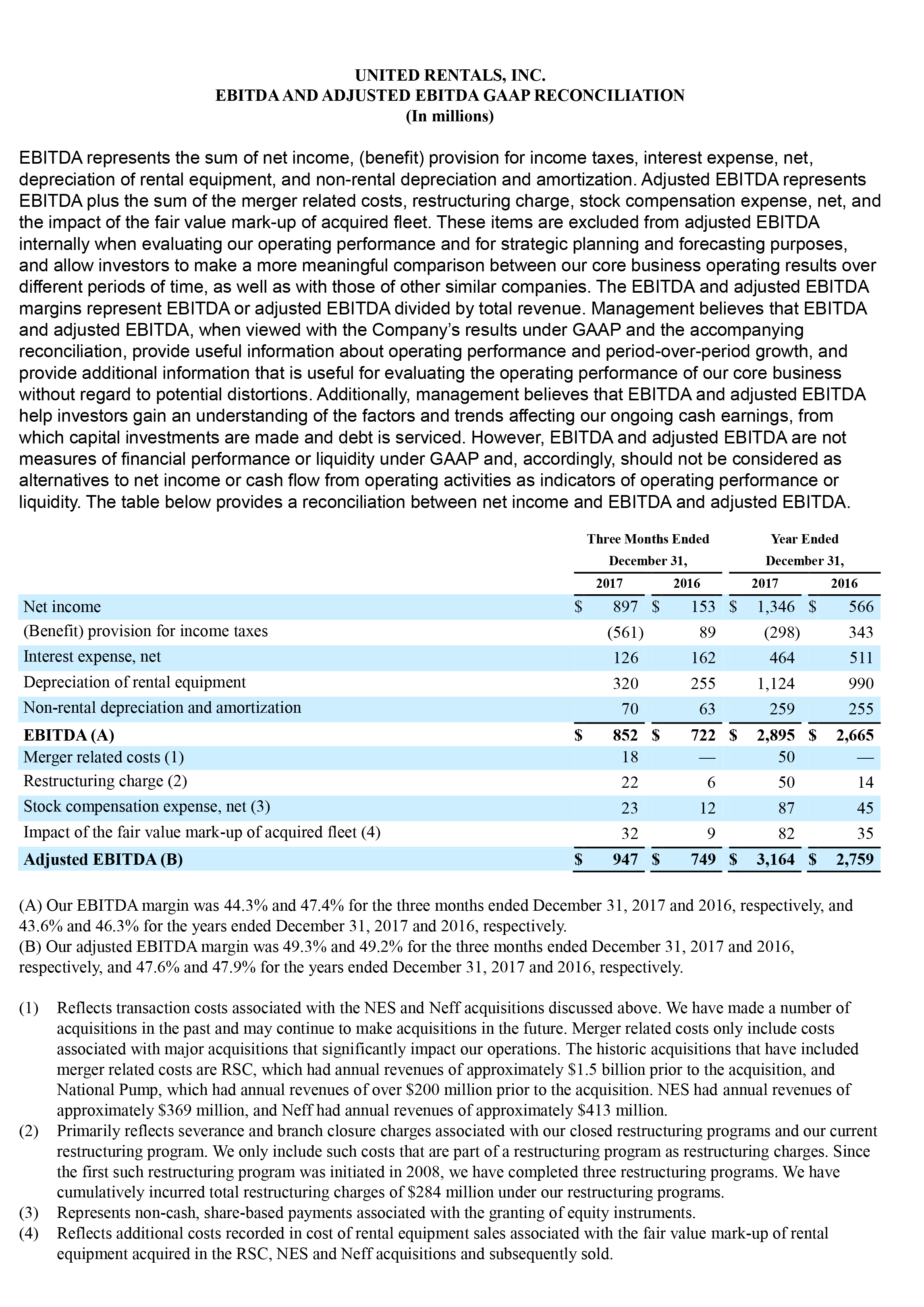 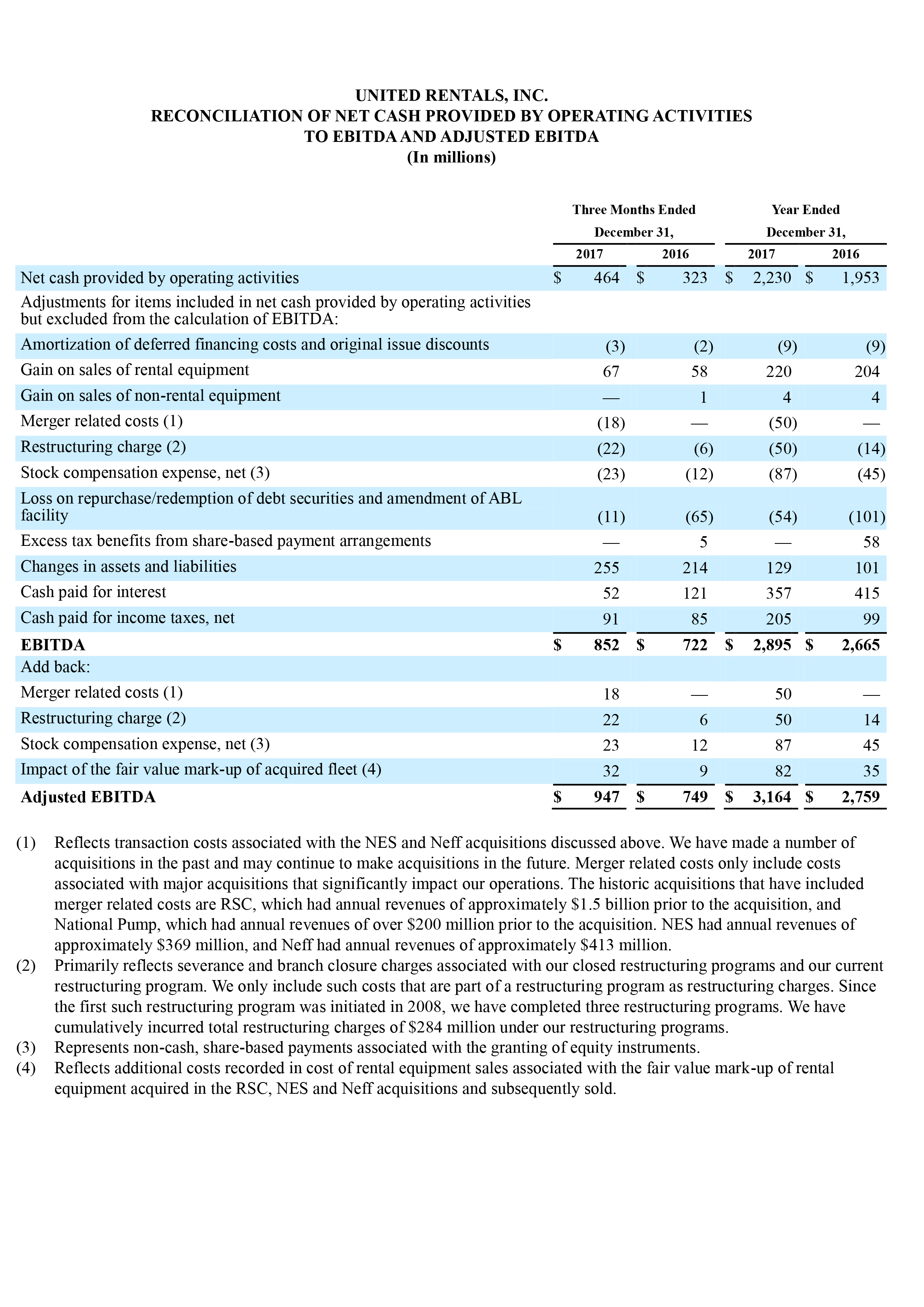 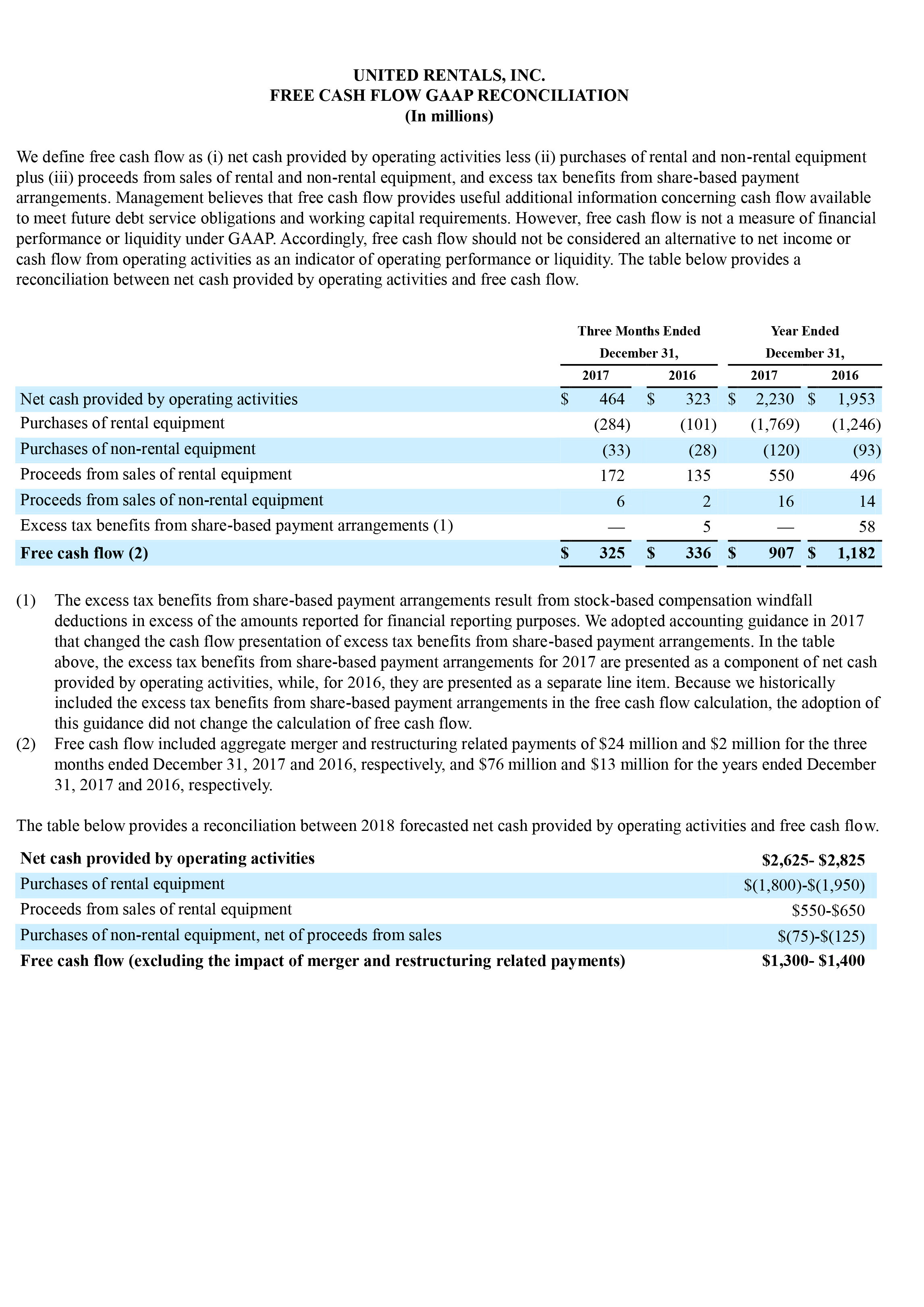